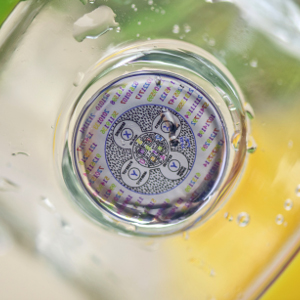 Since the studies of Masaru Emoto we had a revolution about the Mistery of water. Yes, by these studies we know that the water records information of the enviroment.

After Masaru Emoto a lot of reserchers have produced studies about the memory of water.

The one of the great resercher is Ing. Vili Potznik, by Slovenia.

The team of Vili Potznik has more of 500.000 information recorded and has transfered only more 10.000 in i9BOTTLE trought a special gel/stiker on each bottle. This device can not expire, is for ever!!!

For this reason i9BOTTLE is the best system for the memory of water.

The i9 bottle has a powerful silicon tag that was developed by Poznik Technology (TP). TP technology is backed by 30 years of research & innovation and was developed by a team of world class inventors, who received over 90 international awards & recognitions.

The i9 Bottle positively affects our general wellbeing by helping increase vitality and balance personal energy levels by way of chromotherapy and TP technology, which is the heart of the bottle. TP technology uses a microcosmic energy symbol - the spring of information - to positively affect the water in terms of its vibrational orientation and a high energy potential.

i9bottle enables water structure to be changed into its purest form, giving it the taste and effect of a fresh mountain spring. Through establishing right balance water regains natural molecular structure.

The Berlin Institute for Bioelectrophotonics: the Bottle has a Significant Impact on Water Quality

In a previous edition of the newspaper Misteriji magazine, we have presented an informed i9 bottle, which eliminates harmful information from medicines and other chemistry in the water we drink. The bottle with the official name Informed Water Bottle, which is made in a 0,65-litre version, carries a certificate from the Berlin Institute for Bioelectrophotonics. We are publishing the results of the research by this Institute regarding the effectiveness of its performance. The bottle is a copyrighted work of Vili Poznik, the inventor from Celje, Slovenia.

The research was performed by the Institute's Director, Russian physicist Wadim Saidow, and Prof. Dr. Peter Bukovec as an external scientific associate and founder of the Slovenian Institute for Sustainable Development. The research was done with the GDV technology or the Kirlian camera, and the criteria were the impact of an informed bottle on the energy state of water, and then the impact of this water on the state of people.

The test water was an impeccable drinking water from the water supply system, both from Slovenia (from Logatec) and from Germany (from Berlin), as well as the mineral water. The testing of the impact on the biofield was done in a double-blind experiment, which means that one group of people drank water from an informed bottle, while the other from the non-informed one (placebo), with the volunteers not knowing the water from which bottle they were drinking.

THE IMPACT ON WATER

If the clusters are too large, the body must first break them down into smaller parts before they can be used. For this, it needs additional energy; a person usually pays for this with tiredness, sleepiness, because the body consumes the power to deal with the digestion of water; it is a similar fatigue as after an overwhelming meal, says Prof. Dr. Peter Bukovec.

The researchers measured the informed water with the Kirlian camera at different time intervals. The sensitive camera detected that a change in water occurred instantly when it came into the bottle, while the greatest difference in the restructuring of water molecules was detected after three hours. After that, the difference does not increase, but remains at the level reached.

THE IMPACT ON PEOPLE

They performed tests on twenty people; eleven women aged from 12 to 58 years, and nine men aged from 14 to 73 years participated. Ten of them participated in the survey in Slovenia, and ten in Germany. The testing took place this February and March. Prior to the test, the researchers measured the biofield of each of the testees; then they drank water – either the placebo or the informed water, so that they did not know which water they were drinking. Then, the measurements of aura were made half an hour and one hour after the drinking of water.

The results confirmed that the biofield of the people who drank the informed water increased, significantly. The water that a person drinks after it was in an informed bottle for more than three hours has a particularly good impact on them; the level of stress decreases, a person has more energy and is more balanced. The researchers' conclusion confirmed the initial hypothesis: it is highly recommended to use the informed bottle in everyday life to raise the quality of our health.

Prof. Dr. Peter Bukovec with an informed bottle. The measuring of the effectiveness of its performance on water and the well-being of people was carried out with the Kirlian camera.

The biofield of the people who drank water from the informed bottle increased, significantly.